A Finnish startup wants to automate the way we clean and care for our building facades. Its compact robot is taking the world by the storm.

“Back in 2016, I was painting a cow stable and cleaning its sheet metal roof. It was pretty tough work, balancing on a ladder. I almost had an accident and wondered if there wasn’t better way to do this,” Mikko Valtonen remembers.

This sudden inspiration of the SAP and IT systems specialist led to his founding a startup, Wall Robotics.

From Painting to Cleaning

Mikko came up with an idea of a paint robot that hangs from two diagonal suspension cables attached to opposite ends of the eaves of a building. By reeling the cables in and out, the robot can move vertically and sideways, covering the wall from corner to corner.

Through an online search, Mikko found a Dutch mechatronic developer and sent him the specs. Together with the specialist, he built the first two working prototypes of the paint robot.

Soon after that, a discussion in a hot outdoor tub on a biting Finnish winter day made Mikko rethink the invention. The other person with frozen hair in the tub was Petteri Kontio, a web software developer and experienced entrepreneur. He liked the idea but said that the market for paint robots for facades would be small. “Why not use the robot to clean windows instead?” he suggested. 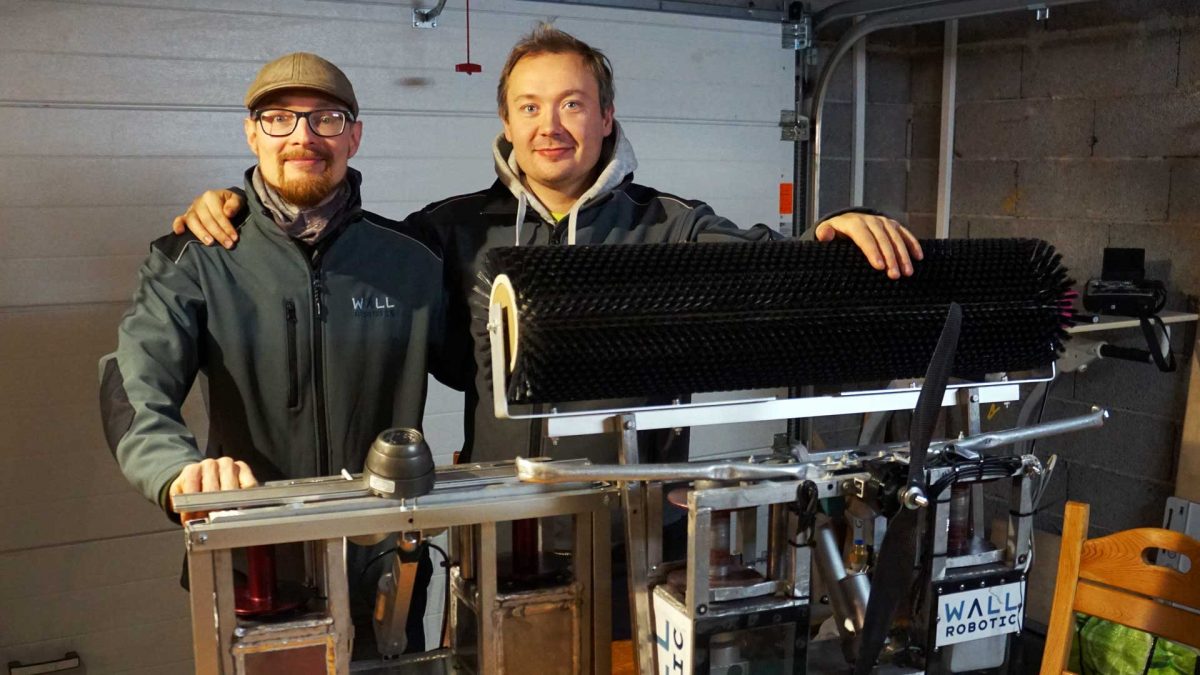 There have been trials from the 1970s on, to automate window cleaning, but as of yet no breakthrough has taken place. For example, a Chinese firm has developed a robot that weighs two tons. Not only is it clumsy, it is much more expensive than manual cleaning.

A European company’s robot is more agile. It uses a rotating brush and suction cups to cling to the window surface. It is limited to full glass facades and requires safety installations, which adds costs. An Israeli firm has substituted robots on traditional cradles for humans.

Petteri ultimately became the software development partner of Wall Robotics, and his suggestion to focus on cleaning soon bore fruit.

The robot project received funding from the Finnish government’s KIRA-digi program in 2017, and an R&D loan from Business Finland. Mikko thinks highly of the support that the Finnish government provides to innovators. The KIRA-digi experimentation project helped them test the concept’s feasibility on several buildings in Finland.

In late 2017, the concept caught fire among certain investors at Slush, and Wall Robotics obtained seed funding in the spring of 2018. KIRA-digi organized a visit to Singapore where the startup quickly made sales to local companies. Now they are preparing for series A funding.

Prototypes that Already Do the Job

Mikko’s garage is the provisional workshop of the startup. Two working prototypes of the robot are on a workbench. A team from Singapore was soon coming to check over the other one. It is equipped with a camera for detecting and recording cracks on buildings’ outer walls – one of the many uses of the robot.

The window cleaning version has a motorized brush roller and a fan on its backside. The device has an aluminum frame, spools for the suspension cables, motors, and a remote control unit. It also hosts inlets for water and electricity.

The fan produces a force that presses the brush roller against the window. Demineralized water sprayed from the top of the device provides a streak-free result.

The patent-pending robot, named WALL-R 1.0, weighs about 30 kilograms and fits into the trunk of a car.

“Apart from the frame, we could buy the components from nearby hardware stores,” Mikko describes. “Using standard parts, it’s possible to mass produce the robot cost-efficiently. An industrial designer will naturally optimize the body of the production version and make it look great.”

The window cleaning robot delivers measurable benefits. It is fast to set up and safe to use. It saves costs both in setup and operation. It’s also sustainable compared to other solutions. A robot can clean up to three square meters (32 sq ft) per minute.

Currently, the operator of the robot uses a remote control of a drone. “We provide a week’s on-site training for the operator. In fact, learning how to use our robot takes less time than mastering manual cleaning techniques,” Mikko explains. “After completing the training, the operator and his robot can replace two to three manual cleaners.”

The next step in the development is to fully automate the operation. This requires knowing where the robot is on the x-y axes of the façade and optimizing its movements. The second development phase involves obstacle detection and neural networks, and there are also some mechanical issues that need to be solved. 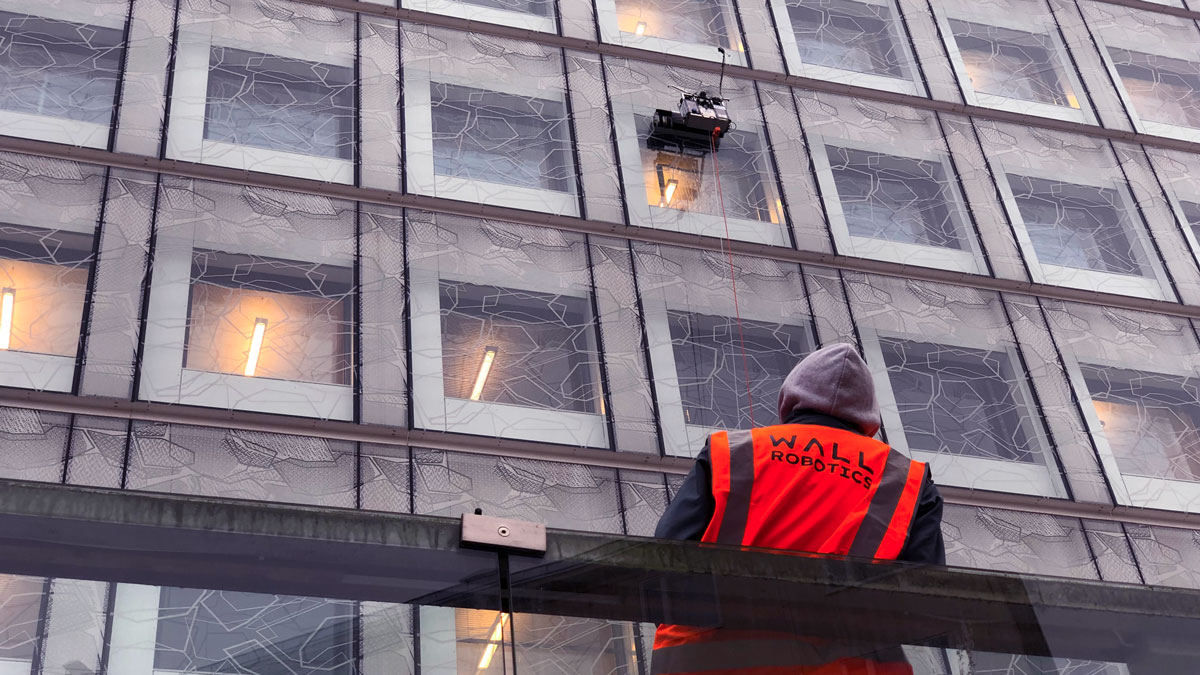 When the system is fully developed, one person can control up to four robots simultaneously. In that scenario, the robots will do the work of 20-30 people.

Wall Robotics promises to deliver a substantial ROI for their customers – it can be purchased at an affordable price and saves up to 80% on window cleaning costs.

The prototype has already cleaned 70-meter-high buildings. With proper extension cables, it could reach up to 140 meters (460 feet). For taller buildings, the innovators will need to devise an alternative way to fix the cables.

“I’m used to developing awesome online services that end up failing because customers are so hard and costly to get,” says Petteri smilingly. “In this business it was the other way around. Customers were lining up before the product was even ready!”

Even on a shoestring marketing budget, the company has a backlog of orders from Singapore and Hong Kong. As we talked, Antti Kahilakoski, the third partner of Wall Robotics, was in Hong Kong meeting customers from Hong Kong and Mainland China.

“Currently, our customers are window cleaning firms or innovative teams that want to shake up the industry,” Mikko says.

Wall Robotics has sold cleaning services to Holiday Inn and Senate Properties in Finland. The startup does not think, however, that a service business model would be globally scalable, so they want to be a tech company providing robots, spare parts, and software.

”We aim to become the world market leader in facade-access hardware,” Mikko proclaims. “The market that is interesting for us is sized at five to ten billion euros. Attaining one percent of that market is within our reach.”

To learn more about Wall Robotics, visit their website.